Four major U.S. newspapers have increasingly quoted extremist anti-immigrant groups without context and used dehumanizing terms more frequently since 2014, according to a report that Define American and the MIT Center for Civic Media released at the Online News Association conference in New Orleans last week.

As quoted in an Intercept article about the study: “Ninety percent of news articles in the New York Times, Washington Post, Los Angeles Times, and USA Today that cited the Center for Immigration Studies from 2014 to 2017 did not mention ‘the extremist nature of the group or its ties with the Trump administration.’” 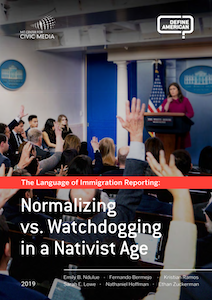 The Define American communications team — Kristian Ramos, Sarah E. Lowe and Nathaniel Hoffman — worked on the report with researchers from MIT, including: Emily B. Ndulue, Fernando Bermejo and Ethan Zuckerman.

“Reporters and editors have three choices when they encounter denigrating speech from public figures: They can adopt the speech and normalize it. They can distance themselves from it, using scare quotes and quotations. Or they can gatekeep, choosing not to bring this language into their coverage,” said Ethan Zuckerman, director of the Center for Civic Media at MIT.

Zuckerman helped present the report and data to a room full of journalists and digital media professionals at the ONA conference last week along with Define American founder Jose Antonio Vargas and board member Peter Perl, a former assistant managing editor at the Washington Post.

At a time when we are jailing children, when white supremacists are killing Americans because they think they might be immigrants, and when hate crimes are at an all-time high, journalists must do better. The Associated Press, the Society of Professional Journalists and style guides across the industry encourage reporters and editors to use humanizing and accurate language when referring to people, to diligently seek out responses to official pronouncements, and to give voice to the voiceless. The significant jump in dehumanizing terms in the media violates these principles.

“There are real-life consequences to elevating dehumanizing language, when the rhetoric of the president of the United States is no different than the rhetoric of a white supremacist terrorist gunman who targeted Latinos in El Paso, Texas—and the media has an obligation not to aid this,” wrote Gabe Ortíz for Daily Kos.

Read a summary and find a link to the full report, “The Language of Immigration Reporting: Normalizing vs. Watchdogging in a Nativist Age,” on Define American’s website.