"Who wants to be on the ex-homeland security secretary’s rehabilitation tour?"

Define American has partnered with CREDO, Bend the Arc: Jewish Action, Never Again Action, Families Belong Together and other partners to demand that Fortune Magazine rescind its invitation to Kirstjen Nielsen, a chief architect of the president’s heinous immigration policies, to speak at the Most Powerful Women Summit in Washington, D.C. next week.

Today, two prominent speakers at the event withdrew because of Nielsen’s participation.

Fortune’s Most Powerful Women Summit “should not be giving Kirstjen Nielsen a platform to rehabilitate her image,” said dream hampton, award-winning filmmaker, author, and activist.

And former First Lady and presidential candidate Hillary Clinton withdrew. A high-ranking Clinton staffer told Slate: “We work with a lot of activists who are trying to do their best to improve this horrible situation down at the border,” the person said, citing Clinton’s support of RAICES and other organizations that advocate for asylees and immigrants. “At the end of the day, it’s an easy decision. You have to side with them.”

Nielsen carried out the Trump administration’s family separation policy. She traumatized immigrant children and families. And Fortune 500 is giving her a platform to rehabilitate her image and escape consequences for her crimes. There is nothing empowering to women about celebrating someone whose policies ripped children from mothers’ arms.

“As a mother, I am stunned and saddened that Fortune 500 invited former DHS Secretary Kirstjen Nielsen to speak at its Most Powerful Women Summit next week. Nielsen was the architect of the failed response to Katrina and somehow still got a big role in the Trump administration. Her policy of separating families at our southern border is barbaric. The utter lack of accountability in giving such a repellant character such a high profile platform to speak hurts America and is awful for children at the border.”

Women of conscience are saying no to this Fortune 500 event. We urge other powerful women on the billing to do the same until Fortune reverses course and disinvites Nielsen. 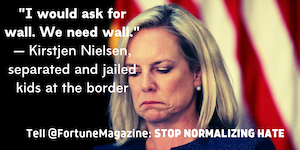