Welcome to the Friday Definer: Links that Define American

Welcome to the Friday Definer, a collection of news stories from across the USA that focus on immigrants, identity, and citizenship.

Crystal Tai at This Week in Asia tells the story of Filipinos in Alaska, the largest minority group in the state after indigenous peoples. At 112,800 people, the “Alaskeros,” as they call themselves, represented more than 15% of the state’s inhabitants last year.

“Pork adobo is a No. 1 dish in the Philippines,” says [Jerry] Manolo, describing the soy-marinated pork belly often served with rice. “Here we put it in a burrito, we do pork tacos, nachos, so American people can kind of relate. But it’s got a Philippine taste.”

The Alaskeros first came to Alaska in the late 1700s. Here’s one professor expounding further on their cuisine:

“Over time, many Alaskeros and Alaska Natives had children together. They combined Alaska Native and Filipino cultures in raising their families, such as making beaver adobo and salmon lumpia.” –> Tweet this!

HAPPENING NOW: Some 200 students from Desert View High School walked out this morning to protest detention of a classmate by Border Patrol. They’re rallying outside the Pima Co Sheriff’s Dept, will be holding a press conference. pic.twitter.com/zWE2iFtZtW

More than 120 of Thomas Torres Maytorena’s classmates walked out of classes and marched to the Pima County Sheriff’s Office to protest his arrest by ICE, reports Rafael Carranza at the Arizona Republic.

Marcell Ibarra said that Torres Maytorena was his best friend and that the two played together on the football team. He helped organize the walkout.

“He’s my best friend, my brother, he’s my ride or die,” Ibarra said. “I would do anything for him. That’s why we’re out here.”

The students carried signs and banners with his name. During a brief rally, they demanded that the immigration officials release Torres without bail so he could return to class.

Days later, after the students raised funds and continued demands for his release, Thomas was released from custody. –> Tweet this!

Define American Ambassador Cesar Vargas tried several times to join the U.S. armed forces but was turned down because of his immigration status. Then he got DACA, graduated from law school, passed the New York State bar, fought his way to the state Supreme Court to become the first openly undocumented lawyer in New York, married a U.S. citizen, and finally got a green card. Now 35, Vargas finally realized his dream and enlisted. Per Camilo Montoya-Galvez at CBS News:

For Vargas, the diversity of his graduating class epitomizes one of his primary reasons for joining the Army: to elevate the stories of immigrants in America who have answered the call to arms.

“It just reflects the contribution that immigrants have had not just in our nation’s civilian life but in our nation’s military since the American revolution,” he said… “My story can be seen as a story, not of G.I. Joe, not Captain America, but just an everyday American and immigrant who is here serving their country and giving back — and really honoring that tradition of immigrants in our military.” –> Tweet this!

Since 2015, one million people have taken advantage of USCIS online applications, including forms to apply for U.S. citizenship and permanent residency, reports Daniel Shoer Roth in el Nuevo Herald and the Miami Herald. (If only USCIS would get moving on approvals again…) –> Tweet this!

Come for the cute kid T-ball photos, stay for the grueling cross-border commutes, a reality since @realDonaldTrump threatened to close ports of entry. Pics: @MarieDennise, from our last Juárez dispatch. https://t.co/VMPkPXfq82 pic.twitter.com/0YybkBlAjF

Lomi Kriel at the Houston Chronicle tells the story of Guillermo “Memo” Garcia, 6, who plays on Little League teams in both El Paso, Texas and in Juárez, Mexico.

Jessica Garcia calls him her “miracle.” At two months, he had open heart surgery for a congenital defect. Now he dreams of being Derek Jeter.

She and her husband signed him up not only for the Lil’ Yankees T-ball team in El Paso, where they live but for the Marlins in Juárez because they considered that team more advanced. Here, Memo’s grandfather could also see the boy play. The patriarch doesn’t have permission to cross into El Paso, even though it’s where most of his family lives, including his wife. –> Tweet this! 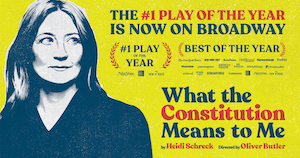 What the Constitution Means to Me, a Broadway play written by Heidi Schreck and co-produced by Define American founder Jose Antonio Vargas, was nominated for Tony awards for Best Play and Best Performance by an Actress in a Leading Role. Congrats! –> Tweet this!

Chris Kenning at the Louisville Courier-Journal profiles winning Kentucky Derby jockeys, many of whom come to Kentucky from Panama:

In the decades that Latino jockeys grew to dominate Triple Crown racing, Panama has produced a disproportionate share of top Latin American riders, earning a reputation as “the cradle of the best jockeys in the world.”

“If horses could talk,” trainer Bob Baffert once remarked, “they would surely speak Spanish.” –> Tweet this!

The Washington Post has a beautiful photo essay from Kevin Seiff and Carolyn Van Houten about a community in Northern Mexico where most of the residents are descended from enslaved Americans who fled south of the border 170 years ago. They retain many American traditions while also being at home in Mexico.

Her ancestors fled to Mexico to escape slavery 170 years ago. She still sings in English to this day. @vanhoutenphoto https://t.co/IXjH9Bsq7q pic.twitter.com/5VIjmzsapx

She is proof of how complicated migration between the United States and Mexico can be: An 86-year-old black woman, sitting in her home in northern Mexico, singing hymns in English.

Lucia Vazquez Valdez is the descendant of African Americans who fled the prospect of slavery in the United States for Mexico in the middle of the 19th century, crossing a border that barely existed. Her tribe is known as the Mascogos. After escaping their would-be slaveholders, they are still living in the tiny village their ancestors settled: Nacimiento de los Negros, or Birth of the Blacks, in the desert of Coahuila. –> Tweet this!

From Boise State Public Radio’s Brooklyn Riepma, Boise, Idaho became one of a handful of cities in the U.S. to receive a “welcoming city” designation from Welcoming America. –> Tweet this!

“I couldn’t imagine in a million years that I’d go over there and come back with one of my best friends being an Iraqi national,” former Army sergeant from Massachusetts Peter Farley told NPR. –> Tweet this!