McClatchy’s first named source in the article is Dan Stein of the Federation for American Immigration Reform (FAIR). And then he closes the article with a broad statement from Mark Krikorian of the Center for Immigration Studies (CIS).

Krikorian has been a regular guest on National Public Radio’s Morning Edition as well, and USA Today reporters Alan Gomez and Rick Jervis recently quoted his CIS colleague, Jessica Vaughn, at length on a story about the Trump administration continuing to separate families at the border despite a court order and pledge not to.

These nationally respected media outlets should be more clear about FAIR and CIS’s anti-immigrant stances, their long ties to white supremacist groups, and their current connections to Trump Administration immigration agencies. As the Society of Professional Journalists Code of Ethics recommends: “Identify sources clearly. The public is entitled to as much information as possible to judge the reliability and motivations of sources.”

Don’t use FAIR and CIS as sources without context

We are sure that NPR, USA Today, and McClatchy editors know that FAIR and CIS belong to the network of anti-immigrant hate groups founded by avowed white nationalist John Tanton. [Source: SPLC]

According to the Southern Poverty Law Center, Stein is on the record as director of FAIR arguing that the Immigration and Nationality Act of 1965 was “a great way to retaliate against Anglo-Saxon dominance and hubris,” and that “it’s almost like [immigrants are] getting into competitive breeding.” Krikorian has argued for IQ tests for immigrants and that Haiti was not colonized long enough. And Vaughn has disparaged immigrants with protected status as contributing to the “street gang problem” and worked with an anti-semitic newspaper and a white supremacist publishing house.

Ordoñez identifies FAIR merely as a group that “has long called for the implementation of E-Verify.” He does not provide any description of the CIS mission. He fails to mention that FAIR and CIS are designated as hate groups by the Southern Poverty Law Center. Other outlets describe these groups without providing any context on their legacy of hate. 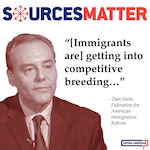 Journalists must stop citing organizations that are confirmed as hate groups by the Southern Poverty Law Center, or other experts in U.S. extremism.

These groups should never be cited without including the necessary context of their professional relationships and connections within the Trump Administration. For example, CIS supporters and staff from CIS and its allied organizations in the Tanton network have taken powerful positions in the Department of Homeland Security.

Journalists should instead cite organizations with views that are more representative of the mainstream perspectives on immigration — not hate groups — in their immigration coverage.

Some suggestions for reporters

The role that FAIR and CIS are playing in this administration’s immigration policies is interesting, but give us some context. These groups exist to overturn 54 years of a family-based, diversity-based, and humanitarian immigration system. Today, the Trump Administration is proposing just such a reversal. Reporters should help readers make this connection.

Why don’t reporters also point out that several former FAIR and CIS staffers, including Jon Feere, Julie Kirchner, and Robert Law, are now part of the Trump Administration, and that high-level staffers at immigration agencies have long-standing ties to said groups? That seems like a reasonable disclosure, particularly in light of the anonymous sources in many of these articles. 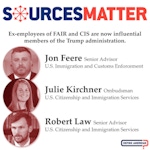