The first-person accounts of two graduating Texas high school seniors are changing the way people are talking about undocumented immigrants. On Friday, June 3, Mayte Lara of Crockett High School in Austin, TX tweeted that she was undocumented, as well highlighting her accomplishments: a 4.5 GPA, a full-ride scholarship to the University of Texas at Austin, and a series of cords and awards. 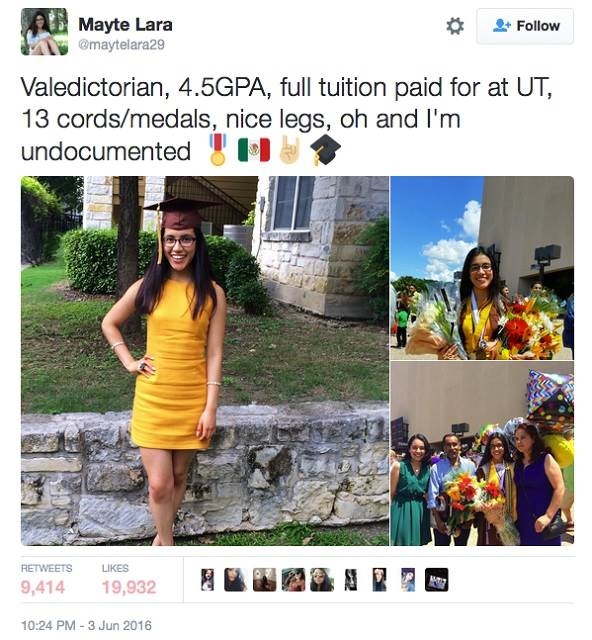 Two hundred and fifty miles away, at McKinney Boyd High School in McKinney, Texas, another high school standout made her own announcement via her valedictorian speech. In her speech, she revealed her family’s escape from an abusive father, as well as her lifelong dream to become an American. This was punctuated by her revealing that this dream has yet to be realized: she is undocumented as well. The Yale-bound student stated plainly, “Undocumented immigrants are people, too.”

Immediately, social media users reacted both positively and negatively to the news. As views on immigration have become more pronounced this election season, the rhetoric aimed at these young women got especially nasty.

Solange Knowles raised her voice in support of Mayte:

You are so pop’n #MayteLara ❤️

And Larissa’s high school friend came out as her ally, showing that it takes a community of allies to show that undocumented immigrants are already a vital part of our communities, our families:

Angy Rivera, whose previous undocumented status was the subject of the PBS documentary , Don’t Tell Anyone, weighed in:

#MayteLara deserves all the good things coming her way. Forget the haters.

Much of the negative rhetoric is centered around the misconception that these women are somehow stealing awards and recognition that would have gone to citizen students. This fails to acknowledge that these young women are citizens in all but paper. They have lived here for years, made friends, become part of their communities. They clearly want to be a part of this country, and have worked hard to ensure the safety and health of their families. Their stories of sacrifice, toughness and acclimation to a new and unfamiliar place are as American as the stories of the Italians and the Irish immigrants of yesteryear.

To underscore this, Jose Antonio Vargas said in a Facebook post, “The “coming out” of these two young women is not only brave–it’s part of a movement to define “American.” We come out to let people in, to insist on the humanity of a very political issue so people can understand that we are not criminals, that our lives are worth more than pieces of papers.”