As the media continues to cover the policy of separating parents from their children at the border, here is a helpful guide. For more information, and to access the largest set of potential immigration-related stories online please contact [email protected]

QUESTION EVERY JOURNALIST SHOULD ASK:

FACTS EVERY JOURNALISTS SHOULD KNOW:

FACT: The Administration Is Jailing Parents While Their Children Are Left to Languish in Detention

FACT: The Administration Has Not Published a Process for Reuniting Children with Their Parents Under This New Rule

“From October to December 2017, HHS called 7,635 children the agency had placed with sponsors, and found 6,075 of the children were still living with their sponsors, 28 had run away, five had been deported and 52 were living with someone else. The rest were missing, said Steven Wagner, acting assistant secretary at HHS..”

FACT: This Policy Is Not Deterring People from Entering the United States

THE STORY EVERY JOURNALIST SHOULD KNOW 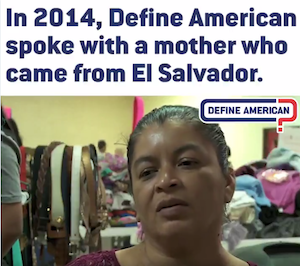 In 2014, a refugee escaped El Salvador to protect her life and talks to Define American from a shelter housed at the Sacred Heart Catholic Church in McAllen, Texas. This story is eerily similar to those we are hearing today at our border.  You can email us with stories at [email protected].