Since 2014, major U.S. newspapers have used dehumanizing labels to refer to immigrants at a steadily increasing rate, according to a new study by Define American and the MIT Center for Civic Media. This disturbing trend coincides with a vast increase in coverage of immigration-related issues. The study, “The Language of Immigration Reporting: Normalizing vs. Watchdogging in a Nativist Age,” also found an increase in quotes from extremist anti-immigrant groups in trusted news outlets such as The Washington Post, The New York Times, The Los Angeles Times and USA Today. In a post-El Paso America, the words we choose have real consequences in people’s lives.

The Associated Press, the Society for Professional Journalism, and style guides across the industry encourage reporters and editors to use humanizing and accurate language when referring to people; to diligently seek out responses to official pronouncements; and to give voice to the voiceless. The significant jump in dehumanizing terms in the media violates these principles.

The Trump administration openly uses derogatory terminology like “illegal immigrant” and “alien,” and models its immigration policies and talking points on language used by extremist anti-immigrant organizations founded and funded by the eugenicist John Tanton. The media appears to be following this lead to various degrees.

At a time when we are jailing children, when white supremacists are killing Americans because they think they might be immigrants, and when hate crimes are at an all-time high, journalists must do better. Mirroring the corrosive language of this administration and of extremist groups is dehumanizing vulnerable populations and legitimizing hate speech. 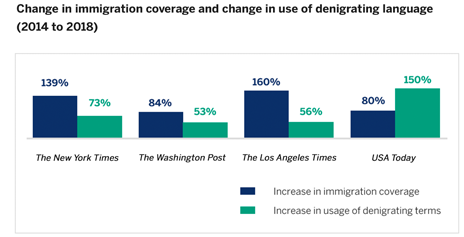 Dehumanizing terms in the four papers studied increased from 2014 to 2018.

The Washington Post and The New York Times had a higher percentage of stories with denigrating terms than a broad collection of U.S. national sources.

Over 90% of the time, the Center for Immigration Studies was referenced as a neutral information source for expert opinion or data without contextualizing the group’s extremist ties or its relationship with the Trump administration.

Perhaps surprisingly, dehumanizing language in stories does not initially appear to increase its virality on Facebook.