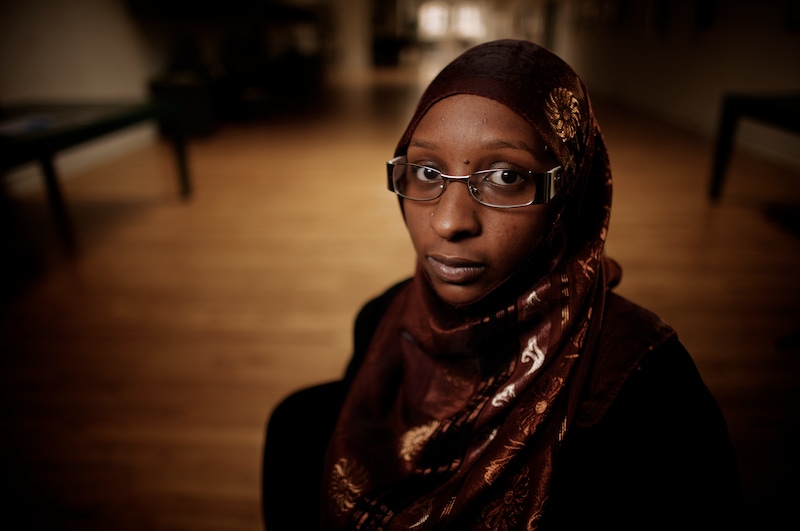 This is not my story, but the story of Adama Bah, an incredible and brave young Muslim woman I met six years ago at an afterschool arts program in Harlem where I was a video teacher. Two months prior to our meeting, Adama woke up just before dawn on March 24th, 2005 to find nearly a dozen government officials in her family’s East Harlem apartment. She was arrested and taken to a maximum-security juvenile detention center in Pennsylvania. An FBI document leaked to the press mysteriously identified Adama as a “potential” suicide bomber and an “imminent threat to the security of the United States.” After six weeks of public protest and media scrutiny, Adama was released with an ankle bracelet and a deportation order, but no terrorist charges. Until her arrest, Adama had no idea that she was here illegally. Stunned by the possibility of deportation, and still traumatized by the experience of her detention, the racist treatment she received from guards, as well as the humiliating strip searches she was subjected to, Adama was forced to drop out of high school and support her four younger siblings when her father was deported to Guinea, Africa in 2006. As I gradually became aware of the extraordinary pressures bearing down on this teenager, I encouraged her to use a camera to document her story, so that others would be able to learn about the profound injustice she and her family were facing. However, Adama was overwhelmed by the huge responsibilities that had been thrust upon her and confessed to me that she was unable to invest any extra energy into making a film. I asked her if she would feel comfortable having me spend time with her and her family and document their experience. She agreed. Now, six years later, the film is complete and I am honored to share it with the world. In early November 2011, ADAMA premiered on PBS World, and for the next 24 hours (until midnight December 6th) it will be available online here: http://worldcompass.org/episodes/adama I encourage everyone to watch it, and to share your thoughts with myself, as well as with Adama and her family, either on the site or on our facebook page: https://www.facebook.com/pages/ADAMA/119984098045674 Thanks. -David Felix Sutcliffe director of