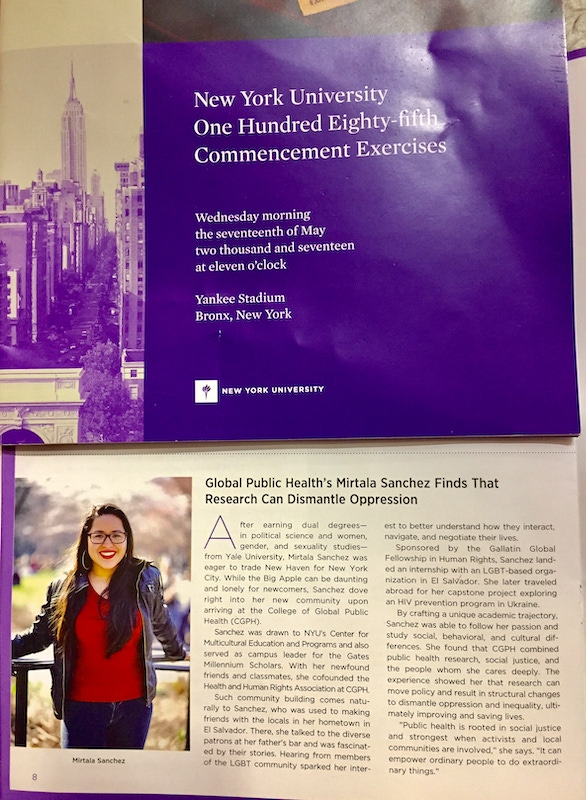 Morning, my name is Erick and I would like to share Mirtalas story who graduated last week with an honorable mention with a masters degree from NYU. Mirtala, daughter of immigrant Salvadorenos and attended all LA public schools..

After earning dual degrees—in political science and women, gender, and sexuality studies— from Yale University, Mirtala Sanchez, 26, was eager to trade New Haven for New York City. While the Big Apple can be daunting and lonely for newcomers, Sanchez dove right into her new community upon arriving at the College of Global Public Health (CGPH). Sanchez was drawn to NYU’s Center for Multicultural Education and Programs and also served as campus leader for the Gates Millennium Scholars. With her newfound friends and classmates, she cofounded the Health and Human Rights Association at CGPH.

Such community building comes natually to Sanchez, who was used to making friends with the locals in her hometown in El Salvador. There, she talked to the diverse patrons at her father’s bar and was fascinated by their stories. Hearing from members of the LGBT community sparked her interest to better understand how they interact, navigate, and negotiate their lives.

Sponsored by the Gallatin Global Fellowship in Human Rights, Sanchez landed an internship with an LGBT-based organization in El Salvador, Entre Amigos. She later traveled abroad for her capstone project exploring an HIV prevention program in Ukraine.

By crafting a unique academic trajectory, Sanchez was able to follow her passion and study social, behavioral, and cultural differences. She found that CGPH combined public health research, social justice, and the people whom she cares deeply. The experience showed her that research can move policy and result in structural changes to dismantle oppression and inequality, ultimately improving and saving lives.

“Public health is rooted in social justice and strongest when activists and local communities are involved,” she says. “It can empower ordinary people to do extraordinary things.”