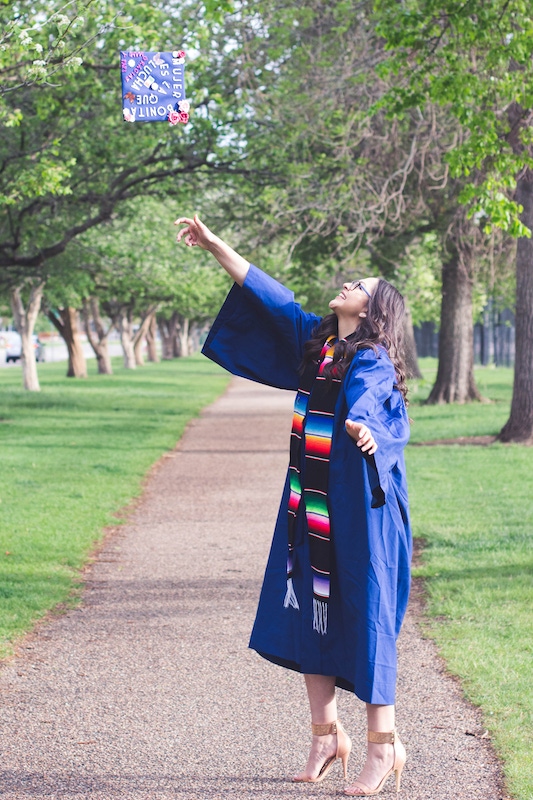 This is for my parents, who couldn’t make ends meet so they made and sold burritos to pay the bills. For my papi, who was too afraid to submit worker’s comp because he didn’t have an ID, after a metal panel fell on his forehead at work and cut him so deep he blacked out. For my mami, who comes home after a 13 hour work day, feeling pain in her wrists from making the same movement over and over again, and somehow still has energy to clean and feed us.

For my sisters who have been in this struggle with me, who have hugged and kissed me when I’ve felt like giving up, who have always found a way to support and encourage me.

So many times I felt like giving up, but I saw how hard my parents worked just so I could go to college. Working overtime, sometimes working two jobs, selling burritos on the side, all with smiles on their faces. This is for mi gente.

For all the kids who’ve had to translate for their parents with their broken English, for the kids who grew up feeling like they were “ni de aqui, ni de alla”, for the kids who didn’t have cars and had to commute long hours just to get to school or work, for the kids who came home after a long day at school and had to translate a bill or notice to their parents, the kids who crossed the border and suddenly had to grow up and figure out how to navigate a new world full of uncertainty, the parents who work SO DAMN HARD to put food on the table every day, the parents who love us unconditionally, the ones that are willing to whatever it takes so that their children will have a better future. This is for you.

So fuck your 9 digit number, fuck your borders and your walls! We are #HereToStay.