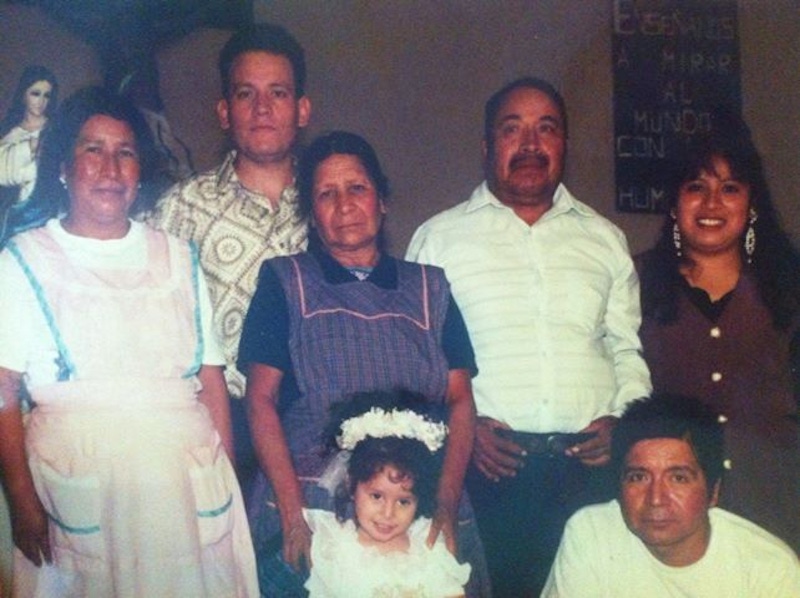 I was born in Mexico city in 1991. My father could not afford a place of his own so we lived with my grandparents along with 5 other uncles and aunts each with their own family. Unfortunately We had to live near the same area were the pigs lived. My father and mother had to work from sunrise to sun set so I was raised by my grandparents up until I was 3. We were robbed in Mexico and could not do anything about it because the Mexican cartel was everywhere and had no where to turn to. that’s when my father realized we needed a better life so he decided to bring us to the united states. My parents had to come walking threw the desert for a week, while I was drugged and passed threw red a car. When I woke up I was with a some what foster family where I would wait two weeks for my mother to go and get me, they didn’t treat me to bad other than for breakfast, lunch and dinner I would only be allowed to eat eggs. Even at the age of 3 I had faith that I would be reunited with my family. When my mother and I were taken to see my father we lived on Broadway, Camden NJ where other relatives lived we called the building “The Castillo” or “ The Castle”. It was nothing like that we lived there for 6months along with a manifestation of roaches, mice and spiders EVERYWHERE. My dad had to walk 2 hours to get to work while I was home scared that my father wouldn’t come back and get deported. We earned enough money to get a nice apartment I loved it, it was clean. But at the time we had spent all the money on getting the apartment but didn’t have anything to eat so we would wait for my relatives to give us something to eat. As a immigrant my parents could not receive the same opportunities as everyone else they had to work 12 to 14 hour shifts to support our family, while I was left alone to basically care for myself. When we where stable my parents decided to have another baby so I wouldn’t be alone. My sister was born sick and my parents had to work now even harder, so at the age of 8years old I became a second mother to my sister and dedicated my life to her and school.

I decided that that was not going to stop me so worked hard in school and became a good student. I earned the NJ Stars scholarship and I was offered a internship in Italy because I was good in school and very active. My parents then told me that I could take any of this because of my status. I became depressed because I had worked to hard for that opportunity. Soon after I became a victim of domestic violence by my boyfriend whom I lived with and had my son Cristian Rodriguez by. So I fell into the same chain that all immigrants have to face supporting a family and working 11- 12 hour shifts in a pizza shop. I never lost hope of getting my situation fixed. I got a lawyer and started my process of fixing my papers. Which after I received my work permit. The diocese of Camden offered a opportunity to study theology in College of Saint Elizabeth, which I am forever grateful to them. I recently when to court with immigration in March to see if I would get my residency and the judge told me “sorry it has been the denied keep working hard, I’m so sad for you, you have so many diplomas I can see that you are such a good student”. I walked out crying because at that moment I realized that there is no path for me more less my parents a path to citizenship. I cried because I have not seen my grandparents in 19years. I cried because my grandmother has skin cancer and she needs care. I cried because my grandfather has diabetes, has only one leg and is about to receive dialysis but we have been told that he might not make it. Icried because my aunt that I lived with in Mexico has been diagnosed with a tumor in her brain and her heart is giving out, she needs an operation on both of them. What hurts the most is not being able to say good bye in person because these are the people that cared for me also that he still ask me every time I call when I’m coming back. The judge told my lawyer put me under the Deferred action in order to not get deported. I have been denied from the Deferred action because I was asked to pay the fine but I already had the permit.

After my son was 4 years old I remarried but unfortunately we cannot afford all of the fines that immigration is asking because I go to school, I started a new business and my son and I live off of my husbands income. My husband has applied for the deferred action as well, he’s going on 6 months with no response. He wants to be a doctor but he was to decided let me go to school first then him. Which we don’t even see that coming along well, because I cant afford school because I do not qualify for financial aid or in state tuition. We can only afford 1 class per semester, but I will never give up hope to one day have a masters in theology and paralegal studies. Because I have become so involved in this fight I have become interested in a career in law because I believe in the word of the lord that we are all one image of God.

On July 12, 2013 My grandfather on my mothers side was rushed to the hospital because he was vomiting and peeing blood, he was also not eating or responding well. On July 16, 2013 my grand father became diagnosed with terminal cancer. We all have work permits but can not return. My mother cannot say good bye to her father or give him his kiss good bye. My grand father is asking to she her before he goes but we can not give that to him. To be the oldest child its hard for me to be strong for everyone especially my mother who is diabetic. My mom is faced with going or not going, either way she will always regret either decision. Its not fair that everyone else can have this opportunity but like many immigrants we are not untilled to.

I became a DREAMer for many reasons because I don’t want any child to go threw what I went threw. I don’t want my son to fear me getting deported. I don’t want to be separated from my sister only because she was born here. Because I want to be able to be close to my parents. Because this is my home I don’t know any other place other than U.S. Because I want to continue my education and most importantly because I want to be able to say my last good bye to my grandfather and my aunt, I only want one minute to go back and hug them and let them know how much I love them. And so I am a fighter and I never give up. I thank God everyday for giving me strength because I might not have the paper to prove it but I AM AN AMERICAN!