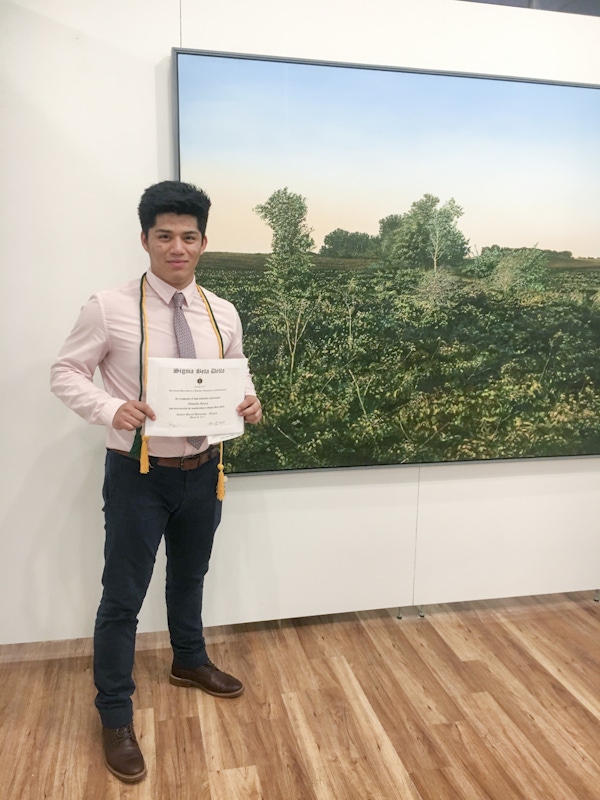 My name is Oswaldo Alanis, I was born in Mexico City and when I was 3 years old I was smuggled across the U.S. – Mexico Border. I didn’t realize it at the time but this moment would change my life forever. That day I became an Illegal Alien, and my reality turned into living undocumented. Today I’m a recipient of DACA which stands for: Deferred Action for Early Childhood Arrivals. This program has granted me temporary work authorization and protects me from deportation. Unfortunately, DACA is only a temporary solution for a long-term problem as it offers no pathway to citizenship and no guarantee of renewal. Under the current administration, the program is under threat of being revoked. It saddens me to know that my humanity could be determined by a piece of paper with an expiration date on it. I am an American but most of all I am a Human Being.

On January 26th of 2019, my employment authorization card will expire alongside my social security number. My situation is complex, controversial and fundamentally misunderstood. My future lies in the hands of many people who feel I don’t deserve to be here, but I won’t allow those feelings to strip me of my hope, because this is my home and I have dreams to fulfill. My dream is to become a financial advisor and create meaningful relationships where I can help others achieve their goals. I dream of making a difference and an impact on this world. I dream of equality in America and envision a stronger country where we manage to come together.

I am a “DREAMer” but reality is inevitable and in order to achieve my dreams actions must be implemented. We live in a country that accepts diversity out of political correctness rather than the value it creates. I’m at a point of high uncertainty caused by my legal status. I could sit here and worry about the moment that my life can turn upside down and I could lose everything I’ve worked so hard for, but I refuse to. My entire life has consisted of taking risks, living in survival mode and turning my greatest fears into optimism. I share my family’s story today because I truly believe people in our situation add value to this country, so our voices must be heard.

Our story begins when I was only a baby. In 1998, my father crossed the border having no idea what he was getting into. For 3 hours, he walked and ran in the shadows of his fear and conscience. The plasters of mud on his feet were as large as his guilt. He felt guilty of not bringing his family with him, and because the only way to provide for us was by doing something unlawful. For 7 months he lived in the cruel isolation of America to provide us with economic wellbeing. He soon realized his family ambitions surpassed his monetary ones, so he set out on a journey to make the American dream real for us.

My brother was born shortly after his return, and even though our journey was delayed the dream remained alive. A year later my dad received an urgent call, our smuggle was ready – but we had to leave that night. We left our natal country without packing, and without an opportunity to say a proper goodbye. Great fear was present in our minds and guilt was pounding in our hearts. People who come illegally make their decisions based on ethics and morality rather than legality. My family, like many others, came to this country because it was necessary. The line between ethical and lawful is very fine, but it is even truer than the one that divides the two borders.

Crossing the border is a huge risk. People face the fear of being deported by border patrol or worse mistreated by their Coyotes. Coyotes are dangerous people, who are motivated solely by money. They have a reputation for raping, killing and holding people hostage. The day we crossed the border my mother, brother, and I were assigned names and documentation. I remember my coyote telling me “If anyone asks, your name is Manuel”. He pretended to be my father, while my real dad was in the trunk of the vehicle with 3 other people. When we finally stepped foot in America we quickly came to the realization we were being held hostage.

At the time the cost for our family to be smuggled across was $6,150. My great aunt was lending us the money, but there was a big problem. The money had already been sent, and it did not end up in the right hands. We had been robbed, so my great aunt received a call letting her know that if she did not send payment within 48 hours, she may never see her family again. Somehow my Tia managed to raise the money again, and I can’t imagine the fear she was feeling.

We finally arrived in Chicago on June 17th, 2001 we had nothing but the clothes on our shoulders and $12,300 worth of debt. Our new journey had just begun, and the transitioning process was not easy. My first birthday in the US was one of the saddest moments of my childhood. I did not get a piñata that year and my parents couldn’t afford to get me a cake. This was our new reality, so they hugged me and said: “We love you baby, and we’re sorry “. This was the beginning of a series of experiences that will always live vividly in my memory. Being undocumented never felt more real than the day we moved out of my great aunt’s house. It was the middle of winter and my brother and I didn’t have proper jackets. We moved into a small basement with fewer items of furniture than members of our family; we had a mattress, a picnic cooler, and an old couch. The window served as our refrigerator for milk and we would eat on an upside down cardboard box. Survival mode was the only mode we knew. My brother and I were too young to comprehend the magnitude of the problem we were in. We thought eating Hotdogs for dinner every night was great! My mom would cry wishing to go back to the country she knew. We were feeling the rejection of this country, but through it all managed to remain optimistic because we envisioned how much better our lives could be here. A huge milestone in our American Dream was our first car. My dad was forced into a terrible deal out of necessity. We bought a car that was breaking apart. Absolutely everything made noise besides the radio. The tires were in bad shape, wire held down the trunk, and there were shoelaces keeping things together under the hood, but when we were in the car it felt like we were in a racecar. It gave us hope and it symbolized a small success between all the hardships.

We have come a long way from these days, without a doubt, I can say my greatest achievement is the unity of my family. They inspire me to set an example and make them proud. Today, my father is a successful carpet installer who does amazing work. My mother is a diligent factory employee who takes pride in her attention to detail. My brother is a leader amongst his peers and attends the prestigious Illinois Math and Science Academy. Just like me, my brother is undocumented, and it is crushing to know that his dreams are compromised as well. My brother is talented and intelligent; he wishes to pursue a career in physics. Sadly, this country tells us that we are criminals, but survival is no crime. The lessons I learned from my experiences are incomparable to anything else in the world. I’ve learned that life is not about material things, and that it is ok to fail as long as you are failing towards a goal. My situation has helped me gain a deep connection and appreciation for my education and work. I am only 20 years old and will be earning my Bachelor’s in Business Administration with a concentration in Finance this spring. I will have graduated in 3 years, earning myself a spot on the Dean’s List every step of the way. I am proud to say that I will be graduating with no student debt because I earned a full-tuition scholarship, and have purchased my own books and paid service fee’s using my hard earned money. I currently work 3 different jobs. I’m a Wealth Management Intern at Morgan Stanley, a Sales Associate at Coach, and a Stylist at American Eagle Outfitters. My work days are typically between 12 and 16 hours, and after work I complete school assignments because school is a priority. I am involved in my community and have participated with organizations such as Habitat for Humanity, Boys II Men, and Junior Achievement. Living undocumented has not only been a challenge, but also a fuel to make every sacrifice worth it. Every day for my family is an ongoing risk, but every night we go to sleep thankful that we are still here.

This country is losing out on great potential assets by not providing people in my situation an opportunity. I’ve been told that I was practically born here, but the truth is – I wasn’t. That birth virtue to call myself American makes all of the difference. Regardless of what we do, what we achieve and even how long we have been here there is no path to legalization. Politicians have argued that people like me should just get in line, but the reality is that there is no line. The solutions available are unrealistic, and for me the only one that leaves some hope is work sponsorship. In order for an employer to sponsor someone like me, they must prove that the person poses unique talents or extraordinary abilities that can’t be found in American. This is a difficult hurdle to overcome and most employers do not see it worth fighting for. I deserve the same opportunities as anyone else not because I am superior, but rather because I am a human being that can offer diversity. My abilities are both unique and extraordinary. I am comfortable taking risks, I thrive in survival mode and can confidently say my biggest fears have been embraced and turned into optimism.

Being labeled an Illegal Alien is so derogatory and hurtful; it feeds fear in ways that make you feel less than human. Actions are Illegal, never people; undocumented immigrants should be part of the American Dream because we’re already living it. When I fill out an I-9 form I shouldn’t have to check a box that tells me I do not have the worth of an American citizen. This country has been shaped by immigrants, so why is it that when I say I am an American that is only my opinion. If more people like me could bring our talents to the table, our accomplishments could become much more transcending. My story was to be kept secret, but I am risking my safety in the hopes of an opportunity. On the night I was smuggled I had to pretend my name was Manuel; today I must pretend my legal status will not make a difference in the outline of my life. Even though I am classified as an Illegal Alien I do not feel like one. Let’s not leave my future up to chance, the future of so many lives up to chance. I ask that you take a stand to defend your race. The Human Race – I AM NO ALIEN.