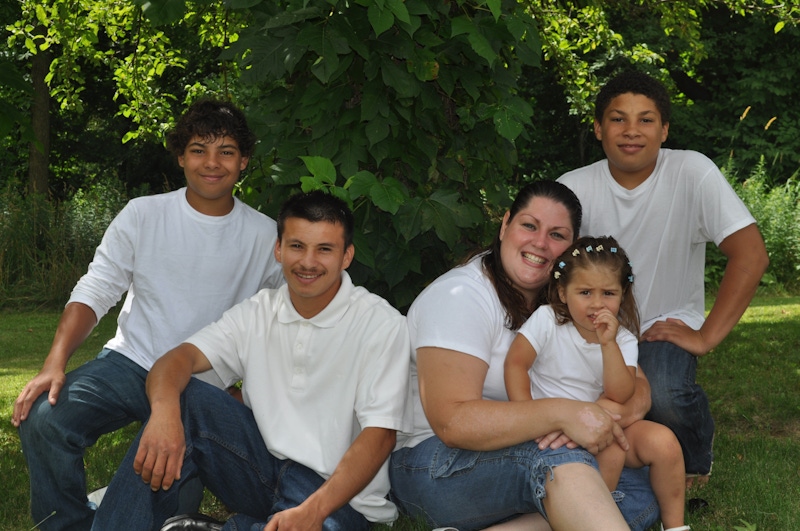 In 2 month I will be married 4 years to a strong, loveable,hardworking, tax paying man.

But, he has no status here! 4 1/2 yrs ago I was introduced to man that came here (US) from Honduras. I was a single mother of 2 boys working 8 – 16 hrs a day 6 days a week. Not making ends meet very well. This was the beginning of June 2007 and at that time I had to send my boys to another state for the summer with my mother so I could work more hrs to try and catch up on some bills with more over time at work. He worked 7 days a week 10 hr days at a horse farm. The 3 day in June was my day off and I was at home very sick with the flu, and my phone rings. On the other end is a friend of mine telling me that the man I met the other day at her son’s birthday party would like to take me to dinner. I begin to tell her how sick I was and she told him, because of course he was standing right there. He offer to bring me some soup with her to make me feel better. So I let them come over to my apartment with almost no furniture in it.

From that day forward we first became friends, we dated, and now married. But what happened in the middle was no accident. When we meet he was sleeping on a coach of someone house who used him for all his money to pay their bills,people used him for a babysitter,housekeeper, and more, plus his full time job. So I made a suggestion that I could help him get on his feet to find a better place to live and he can help me to pay the bills while my boys were gone. Low an behold he was only there 1 month and he became so sick. I stated to him he, you need to go to the hospital. He became so scared he was shacking, vomiting, crying out from the pain behind his eye. I almost have to force him to go. When we get there he becomes even worse. The doctors rush to see what is happening. Very quickly they take him in for a CAT scan and they come back saying he has to stay due to the fact he has a large size mass behind his eye, and it was pushing out into the eye. Plus they have no idea what it is!!!! So they admited him to the hospital. Finding out he has no papers to be here.( That was just the minor thing) Doctors are amused they do not know what he has and why.

After a week of him in the hospital and discovering he has no family here except, one of the people that were misusing him and treating him so badly. So I immediately tell him I was going to help him make it through this. Now the doctor tell me since I was the one that told him that now they need to tell me that they are going to do surgery an they are not sure what is going to happen to him maybe he will die, maybe he will be brain damage, even maybe he will be so bad off that he will need someone to take care of him for the rest of his life. Thinking to myself, I have kids a job, an at that point the doctors tell me as my face in full of tears, we are sorry but we have no clue as to what they are working with. All they know is that everyday this mass is getting bigger and bigger.

So they schedule for surgery for the next morning. I go to the phone and call my pastor, my friends, and my family. We begin to pray for him and put him on the christian radio station an 260 churches called in to pray for him. That nite I took off work.I then felt I needed to express the concern I had for him to be right with the LORD before morning. I go home at around 11pm that nite to get a few hrs of sleep before the big day. I return back to the hospital around 6am and he tells me he made his life right with the lord and he is ok no matter what happens. So around 8:30 that morning the surgeon prep comes in and cuts off all his hair, takes him in for the final CAT scan, then brings him back in the room to wait his turn for surgery. So we wait about 1 hr and the doctor comes in hit him on the foot and says “hey man sorry about the BAD hair cut”, but we don’t have to due surgery no more. We think you may have had some divine intervention because what ever you had there before is NOW GONE!!!!! We both cried, not knowing what to think except he was a miracle.

That day he said to me we made it through the worst time of my life, now we are going to make it through the best. So needless to say he never leaves our house, kids come home, and 6 months later we are married. I become pregnant right away we move make to my home state of Michigan, he gets a job, supports us for 3 yrs then he tells me one day we can take all his tax money from the last yrs and I can open our own company to help people like us.

What make this all so interesting is that at 13 my mother goes through some bad time in her life that she can not handle me. So she send my out of the house, forced to live with family members on drugs and alcohol, bounced one place to another fighting to survive. I was forced to fight for life. I then passed that life on to my children, with their father in prison for selling and usage of drugs. So badly I wanted to make a change in our future….”ONLY IF WE HAD A CHANCE” I would say. Working 13 years in the medical field at this time in which I paid the whole way by myself. But still struggling.

Then him not having enough food to feed his whole family sharing 1 egg between 4 kids, fighting for live. He has 11 siblings. So one day he decide he wants a change. He hears about America and starts walking for over 2 months without money, clothes, food or water. Drinking out of any kind of puddles he could find, because he could not stand to watch his family suffer no more. He had to find a way to feed him. He wanted to make a change for them, because they could not see what to do to make a difference.

So now we have our 3 children, a house, sending his family $100 a month for food to eat, and a company that helps give shelter to abused and neglected adults. Giving them a place to live, food to eat, heat, a shower and most importantly we give them someone that believes in them. We have been open for 1yr as of Oct 2011 and we are a non-profit company. We are contracted by the government departments through protective services. But now after all that the government says he has to go back were he came from. Does not matter what he does now or who he is or even why. We are on our last step of the immigration process but we have no sponsor. This has taken us 3 yrs because we have not had a lot of money. Only enough to make the bill of the company…which is also our home. And because the company has not been open for 2 yrs they cant use the tax papers of the company so that he can sponsor himself.

So lo and behold if he leaves, we lose our home, our company, and go back to what we were before. Even though we fought so hard for this. I just cant raise 3 children 13,11, and 3 by myself, plus run and work the company by myself. An for further more he will never be able to support us from over there.

His family is deep in the mountains….NO JOBS not to mention our $1 = $18.89 over there. BIG DIFFERENCE. I really would now like somebody to tell me why he is not an a American….because he was not born here. He pays taxes (mostly he doesn’t get all of which he should back because of that 9 digit numbers he does not have to be able to carry around), he cares for the underprivileged American people( not because he has to, because he wants to), hes making changes to our society (mostly homeless people come in our home).

He does not smoke,drink, or do any kinds of drugs. He takes care of 2 children that are not his, works everyday, care about the well-being of others, will give you anything he has, and he is in church every Sunday. Now what he did do wrong and he knows is cross the boarders with out permission. We have people here that are far worse than that and they are AMERICANS…SO PLEASE TELL ME WHY HE CANT BE ?