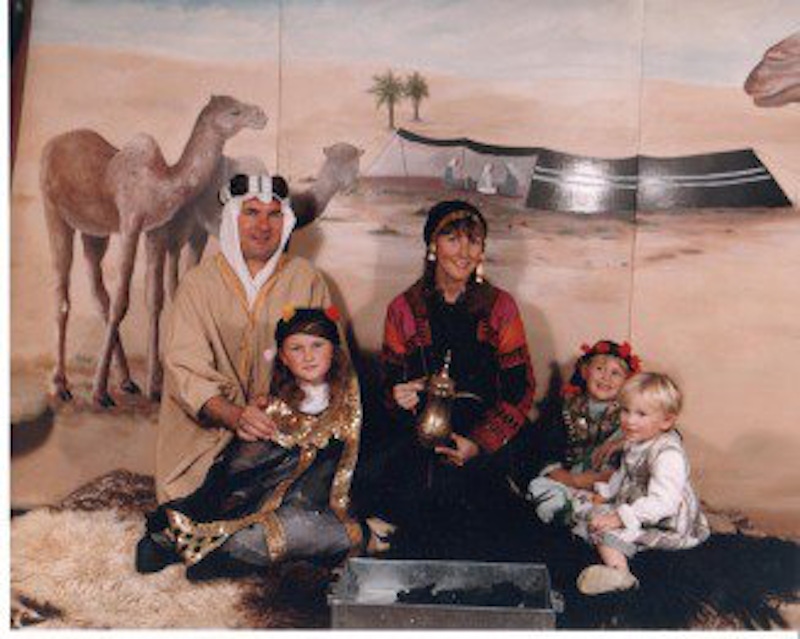 There’s always an awkward pause when someone casually asks me where I’m from. It would be easier to answer what I am, that would get the one word answer: American! But where I’m from? That will take me a minute or two.

I was born in Saudi Arabia, where my parents (both U.S. citizens) were working for an oil company as English teachers. In the picture I uploaded, I’m the little girl on the left, with my dad’s hand on my shoulder. I think we posed for this odd picture, wearing traditional Saudi clothing during our last year in Saudi Arabia. We lived there until I was 7, before moving to a small town in Texas. My second grade teacher was fascinated by my foreign upbringing and pulled me out of class one day for what she thought was my first introduction to snow.

I hope she wasn’t too disappointed when I told her that my grandparents lived in Chicago and I’d spent the last few Christmases there building snowmen and sledding down their street. I used to resent my difference in upbringing – being culturally American, but not having a “hometown” in the U.S. I’m definitely not Saudi, I have no right to citizenship in that country and no cultural attachment there. But over the years I’ve grown to appreciate my unique perspective. Being an American who was raised overseas opened my eyes to a world of possibilities and gave me a better understanding of other people and cultures.

After college I joined the Peace Corps and served as a volunteer in Ecuador for two years. To Ecuadorians, it didn’t matter where I was born. My clothes, my mannerisms and my accent when speaking Spanish completely gave me away as an American. I was proud to serve my country while at the same time truly coming to appreciate yet another language and culture.

Now, I’m a lawyer and I help people with their immigration problems and defend their right to legal status. I don’t think I could understand my clients – what they’ve been through, where they’re coming from, and why they so strongly want to be part of America – had I not been exposed to the world as I was from day one. I love our country and I hope that we continue to be a place that people want to come to, and return to. Most recently, I married a man originally from Chile, who came to the U.S. with his family as a teenager. He and his family have been permanent residents in the U.S. for around twenty years.

When we someday have children I imagine they’ll be born in the U.S. and that they’ll be able to tell people, exactly where they’re from, in a few seconds. I do hope, though, that we’ll continue to share a broader perspective with them and teach them that they are Americans first, but that importantly, they’re also citizens of the world.